The Challenges Of Solar Garden Lighting

For many. solar garden lighting conjures up twinkling fairies from the pound shop, and very pretty they are too.  Use them for a season and replace them when they fail; no worries.

But what about serious, high power lighting  that has a design life of twenty years or more. How do you convert them to solar? Not easily, as we discovered when we had a customer enquiry.

We were asked for a three high power solar garden light system based on our 15W GS75 RGBW LED spike light. The customer wanted to illuminate an artwork in her garden 80m from the house. As the garden is paved and landscaped, running a cable was impossible. She also wanted to be able to control the lights from the orangery.

The running time was to be a minimum of three hours in winter when set to a colour sequence.

Now, as our company history includes making battery-powered runway lights, we understand the challenges this brings.  From boiling batteries in summer to freezing them in winter, this is boot camp for the battery.  As the lights are often in full sun when charging, mounting the battery inside the light was a no-go due to temperature limitations on charging.  We reckoned that the batteries would be best located somewhere remote from the lights, in the shade.

And another unreported issue is the huge variation in battery quality.  We’ve tested batteries from the leading manufacturer and have been amazed at the different performance the same battery from different factories can have.

And sizing the solar panel to give an acceptable winter performance often gives customers a shock on how large (and hence expensive) they have to be. 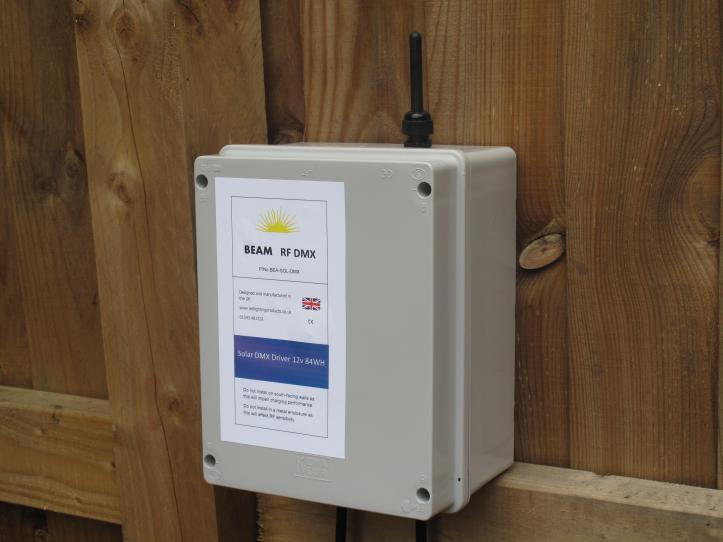 We mounted the charge regulator next to the battery so we could accurately measure its temperature.  Batteries have strict charge/discharge requirements that are often ignored by ‘off the shelf’ regulators so we used our own that we designed for military operations from Angola to Finland.  This has multi-layer algorithms that precisely monitor and regulate the battery over all temperatures, maximising its life.

We were very pleased with the outcome, and we’re soon going to be offering this as a custom-built product on our website.